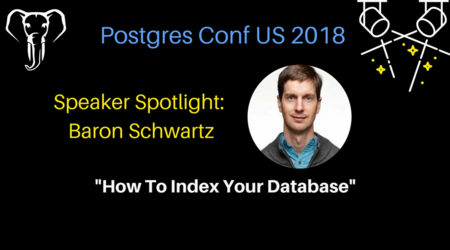 As part of the countdown to PostgresConf US 2018, learn more about the engaging content and our speakers for this year in our Speaker Spotlight Series.

Baron Schwartz is the founder and CEO of VividCortex, the best way to see what your production database servers are doing. Baron has written a lot of open source software, and several books. He’s focused his career on learning and teaching about performance and observability of systems generally (including the view that teams are systems and culture influences their performance), and databases specifically.

Baron will be presenting a breakout session "How To Index Your Database" on Friday, April 20th at 12:50 pm. Read what he has to say about Postgres and why to attend his session:

Why PostgreSQL? What got you into it, and made you stick with it?

The community has always been what’s drawn me to Postgres. From the very first I could immediately sense the deep commitment people had to the database and other people involved with the database. Each database community is special in its own way and has its own culture, and after being involved in many of them you sense it in a way you can’t explain. Postgres’s is loyal to freedom, independence, quality, and principles. All are dear to me as well.

Tell us about your involvement with the greater Postgres community.

What new features of PostgreSQL 10 are you most excited about?

Partitioning! Improved streaming replication! Parallel query execution! There are so many improvements. The pace of development is really impressive.

What features should be developed/improved and released in the next major upgrade?

The database of the microservices-oriented future is only quasi-stateful. By this I mean that it acts almost like a read-through cache in front of “cold storage” like S3. Support for creating an empty database cluster, and having it fetch its data from cold storage on first query, would be game-changing for cloud-native apps. I realize that’s a lot of buzzwords, but it’s going to happen soon!

Why should attendees come to your talk at PostgresConf US 2018? What would you like for them to take away from your session?

Indexing is at once the most important, simplest, and most complicated topic in designing a database; I hope to make it simpler and leave people with three big things they will never struggle to remember.

What sessions are you most excited about attending at PostgresConf US 2018?

I'm really interested in hearing how others are using Postgres, both for creative purposes that showcase its flexibility and extensibility, as well as "use as designed." In my opinion, the best conference talks aren't "you should do this"; types of talks: they are "I did this and here's what happened"; I love stories!

What is your favorite aspect of PostgresConf US?

That’s an easy one to answer: seeing all my old friends again!

What advice would you have for a Computer Science graduate or entry level developer who are interested in learning and engaging with Postgres?

Computer Science seems to feel that algorithms, data structures, and so on are fundamental. Data persistence, especially relational, is equally important. Don’t neglect.

You can invite any three living people from anywhere in the world to dinner. Who do you invite and why?

I invite the three hungriest people in the world and eat mindfully with them, so I learn to appreciate what I have.